ACORN Nottingham, a local community union, has taken action to defend one of its members who has been unfairly demanded to pay a sum of £10,000 to Nottingham City Homes.

On Monday 8th June a letter was sent to Nick Murphy, the CEO of Nottingham City Homes, demanding an immediate waiver of this charge, originally meant for improvement works that were carried out on the ACORN member’s home nearly three years ago without his consent. The ACORN member in question lives paycheck-to-paycheck working at ASDA and cannot afford these charges; this has caused him significant stress.

These planned improvement works were not mentioned when the house was bought. Originally, the charge stood at £20,000, but after involvement with local councillors and the introduction of financial hardship measures this fee was amended to the current £10,000 – this is still far beyond what the ACORN member can afford, however. These new measures allow for the charges to be fully waived, and as such he has since applied for financial hardship assessments on two separate occasions. This has sadly amounted to no change in their position regarding his financial obligation to them, which by any account should be overturned. 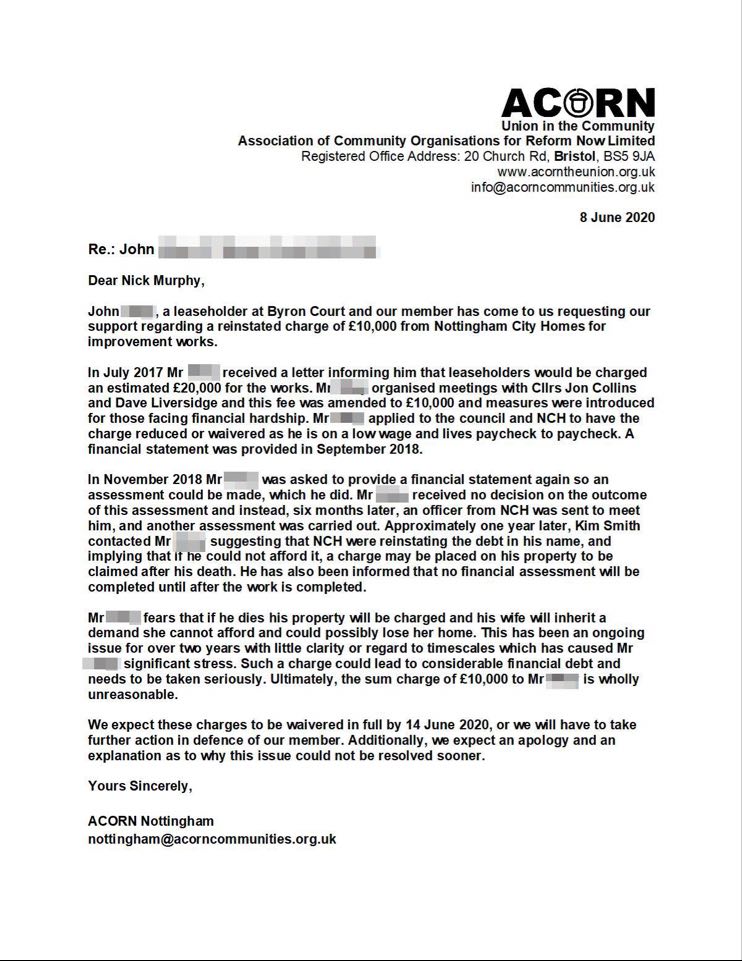 ‘We expect these charges to be waived in full by 14th June 2020, or we will have to take further action in defence of our member.’

Whether it is extortion or sheer incompetence on the part of NCH, this situation has understandably caused the member significant stress. This is compounded by the fact that a charge may be placed on his property to be claimed after his death, which would then become the responsibility of his family – something completely unreasonable and unnaceptable.

From when the letter was sent on Monday 8th June, Nottingham City Homes has been given seven days to respond until further action is taken. As of yet, NCH has issued no reply to ACORN.

Founded in Bristol in 2014, ACORN the union has an impressive track record of protecting its members in many different situations. Last week, the Norwich branch succeeded in protecting a family from a demand to pay £975 to their ex-landlady, and secured a refund of £100 that they had already paid. On a larger scale, the Government has recently gone some way towards meeting one of ACORN’s #HousingIsHealth campaign demands in extending the current eviction ban by a further two months. This campaign is continuing to push for an immediate and permanent ban on Section 21 ‘no fault’ evictions, and further action to guarantee safe and secure housing for all. For more information, visit the website acorntheunion.org.uk.